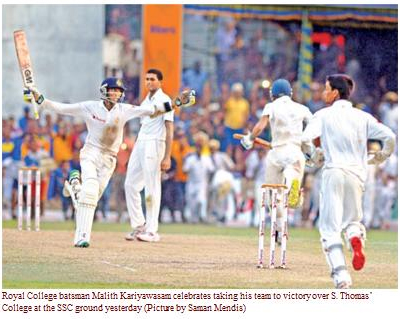 Royal College produced a stunning fight-back to turn the tide and reverse fortunes against S. Thomas’ College who might take some time to comprehend what caused them to lose their 137th big match Battle of the Blues cricket encounter on the third day at the Sinhalese Sports Club ground in Colombo. The Reid Avenue boys scored a seemingly impossible four wicket win.

This is Royal’s second victory in four years after Devin Padmanathan’s side beat them in 2013.

The Thomians and their supporters from all counts may go through some sleepless nights over the next couple of days, as they try to figure out how and why they lost their stranglehold of the match after declaring their first innings at 350 for 5 and then crashing for a paltry 127 in the second innings with a little airy-fairy batting, as Royal like the dark horse came from behind to shatter the party hopes of their arch rival.

Royal needed just 150 for victory which they had no difficulty in reaching as Malith Kariyawasam (38 n.o) held the stage after his team lost four wickets in pursuit of the target.

With both teams scoring over 300 plus in the first innings, the match may have been destined for a draw. However, the poor batting display by the Thomians in their second inning opened the floodgates for an interesting tussle and Royal made certain not to miss the opportunity.

When Royal continued their overnight total of 280 for 7, the main focus was on Pasindu Sooriyabandara (97 not out) and whether he could get that elusive century. He did so unnerved before he was bowled by Kodituwakku for 123 with seventeen fours. Sooriyabandara was engaged in two useful stands first with Kariyawasam adding 139 for the sixth wicket and later another 59 runs with Helitha Vithanage. Royal declared with a deficit of 22 runs.

The Thomians got off to a disastrous start in their second inning losing the first inning centurion Rashmika Opatha for 8 as paceman Himesh Ramanayake was able to extract some life off the pitch and kept the Thomian batsmen guessing. None of the Thomian batsmen could really settle down and they lost wickets at regular intervals.

Your ticket for the: Thomians drowned in Royal roar, as Underdogs became Topdogs cruising to victory